This article is cited from BIMCO website and the author is Mr. Peter Sand.

2019 has seen the highest ever export of soya bean during the month of February. Exports totalled 6.1 million tonnes, a 112.6% increase from the 2.9 million tonnes exported in February 2018. Strong demand, in particular from China, the world’s largest soya bean importer, and an early harvest are behind this large increase.

“As predicted by BIMCO earlier in the year, Brazilian soya bean exports started earlier this season, with much higher exports in particularly in February. Brazil has managed to ramp up its exports to China in response to its increased demand for non-US soya beans following the start of the trade war,” says Peter Sand, BIMCO’s Chief Shipping Analyst. 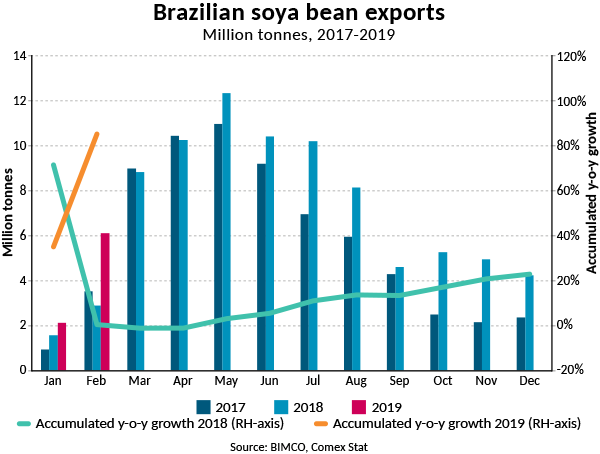 Increased exports bring some relief to the dry bulk market

“The recent upturn in Panamax and Supramax earnings is likely to be linked to the start of the Brazilian soya bean exporting season. The large volumes being exported, in particular to China have driven up the demand for the mid-sized dry bulk vessels,” says Peter Sand. 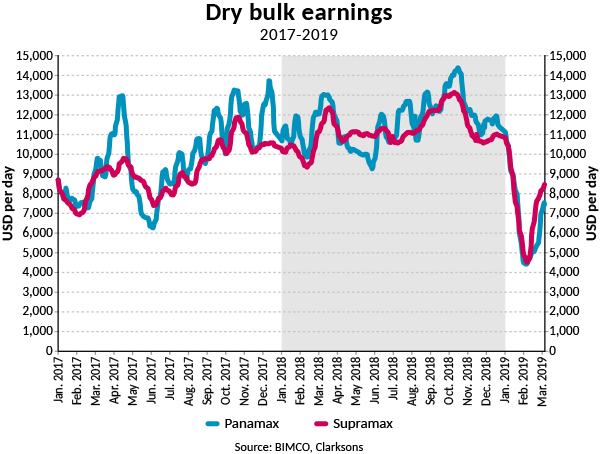 Since 2016, total Brazilian exports have grown year on year, but this is unlikely to be the case in 2019. Production of soya beans is expected to be lower and with many stocks already depleted, the supply of Brazilian soya beans will most likely not match the level seen in 2018.

Exports of soya beans from the US may, in contrast to Brazil’s exports, rise. Given the disappointing US soya bean exports since the start of the trade war, stocks there are high, and should Chinese buyers return, the US would be able to continue exporting through its off season which runs from now until the start of September.

An ending of the trade war and/or further commitments by the Chinese to increase their imports from the US would likely lead to the return to a more usual seasonality than seen during the second half of 2018 and the start of 2019.